End of March 2019, we’re somewhere between Leipzig and Dresden in Eastern Germany. A region that is known for its rather conservative mindset. The little town Mittweida nevertheless is eager to go forward optimistically and has been fostering innovation culture for many years. Together with the local University of Applied Sciences and the city administration, the Volksbank Mittweida just got a several million Euro grant from the German Federal Ministry of Education and Research for their project “Blockchain showcase region Mittweida”. With this initiative, the economic region of Mittweida is to be strengthened and aims to play a pioneering role in the field of digitization and blockchain in Germany. As the first step towards that goal, the initiators co-curated THE HUMAN CONFERENCE together with Christopher Peterka.

As speakers and honorable guests Mittweida could welcome for example Dr. Mart Laanemäe, Ambassador of the Estonian Embassy in Germany. He held a welcome speech where he described how Estonia has set a new status quo for digitalized public services. During dinner another highlight speaker complimented Mittweida on their innovation spirit: Burkhard Balz, Board Member of the German Bundesbank. On the second day the organizers of the conference also welcomed Michael Kretschmer, the Prime Minister of Saxony to be part of the panel discussion “Key to Innovation” as well as a festive inauguration of an installation on the town square symbolizing the “innovation window region Mittweida”. 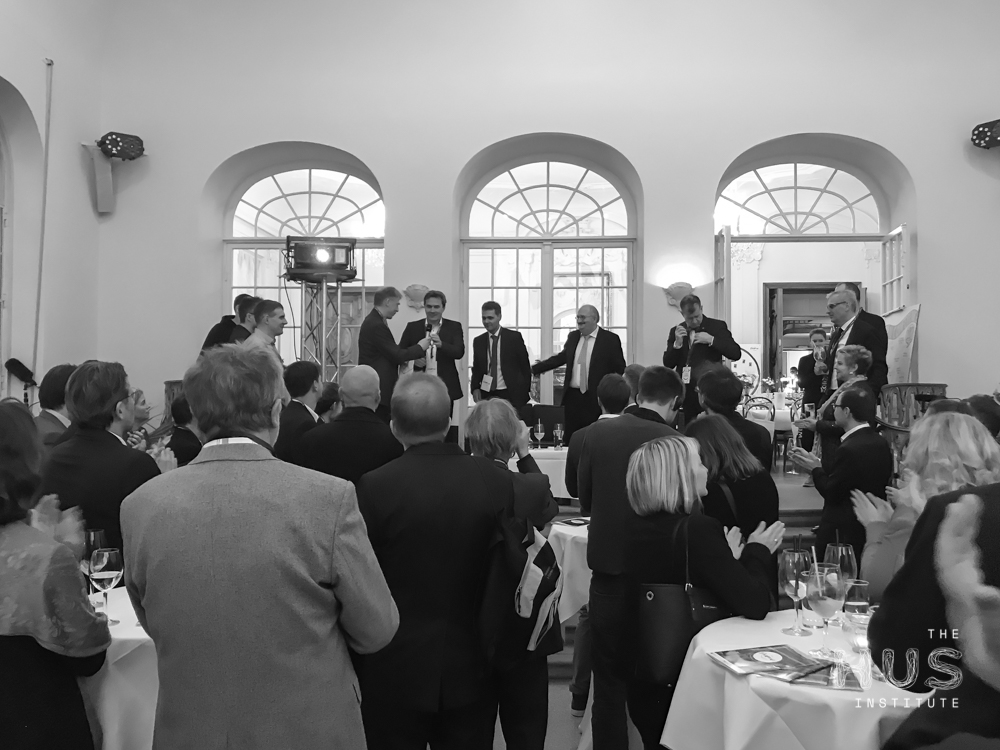 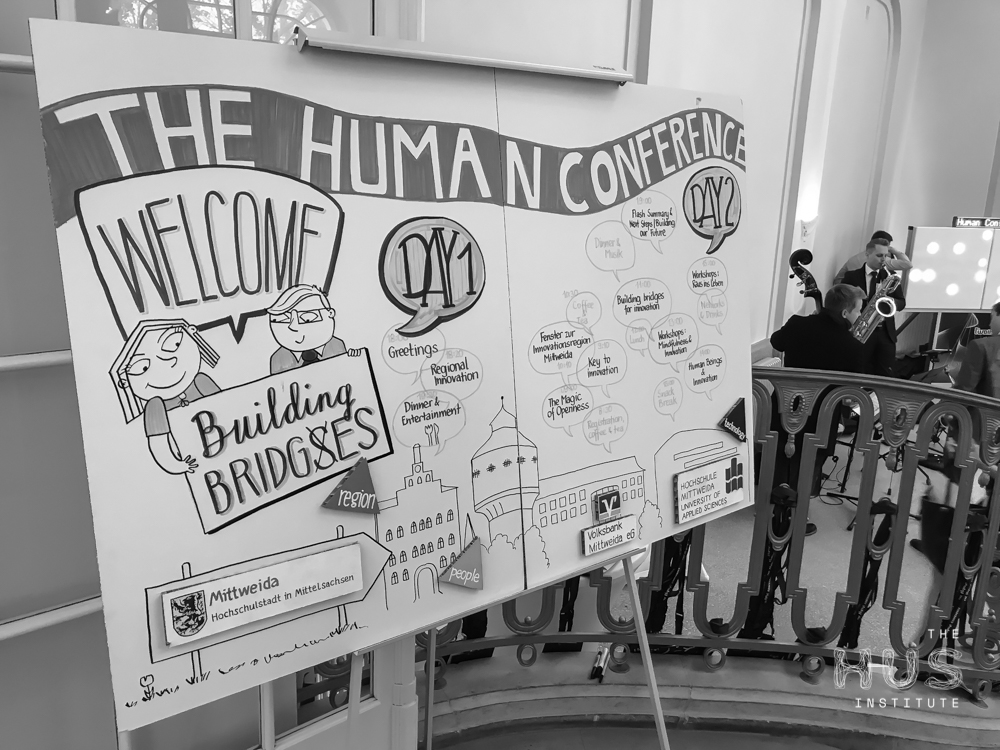 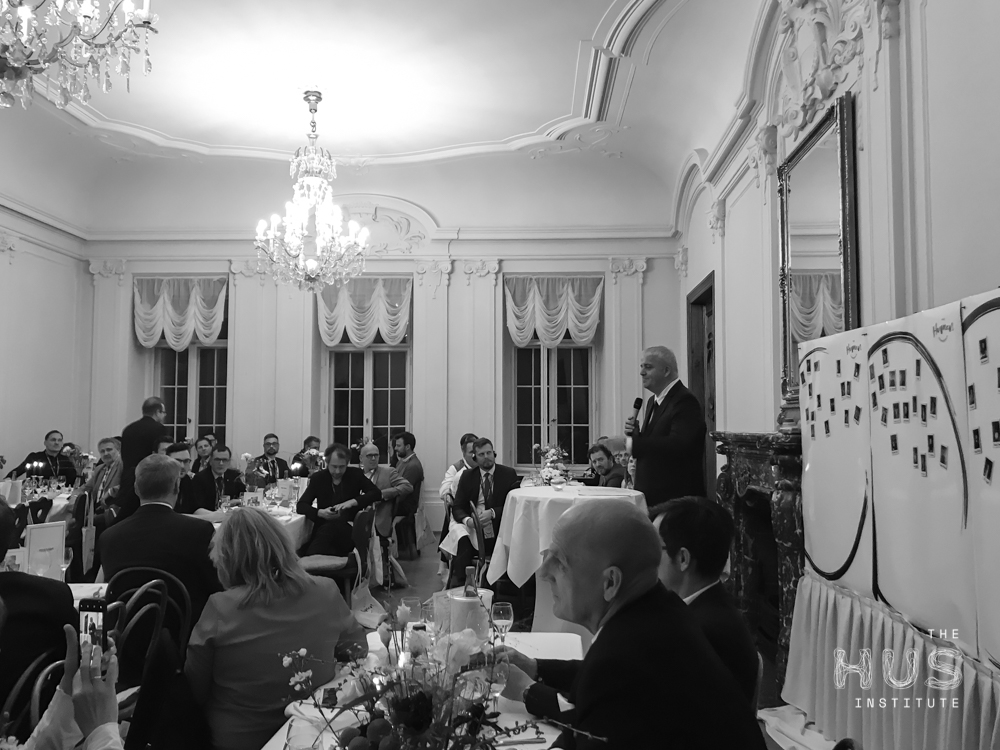 We have been actively taking part in #thehumanconference by moderating and participating in the panel “Humans Beings and Innovation” and by facilitating a workshop “System Change – Sustainability in the Age of Digitalisation”. We’ll sum up our two highlights as well as a workshop we attended – Mindfulness as a new skill in the digital age.

The title describes quite well what we discussed with different panelists and the audience. The basis of the panel was an input by scientist and future researcher Dr. Florina Speth from 2bAHEAD Think Tanks. With the long-term study “The future of your children” the think tank makes future scenarios speakable and thinkable. It contains concrete forecasts for the life and environment of ten (real) children born in Germany in 2015 which started into our world with a statistical life expectancy of 100 years. Florina introduced everyone to one of the most important questions she’s been asking future experts for her research: What is the next step of human evolution? We got deep fast in this panel and had a great discussion about scenarios that could happen in 2115, brain downloads and the great moral questions of AI. Read about it in our separate review. 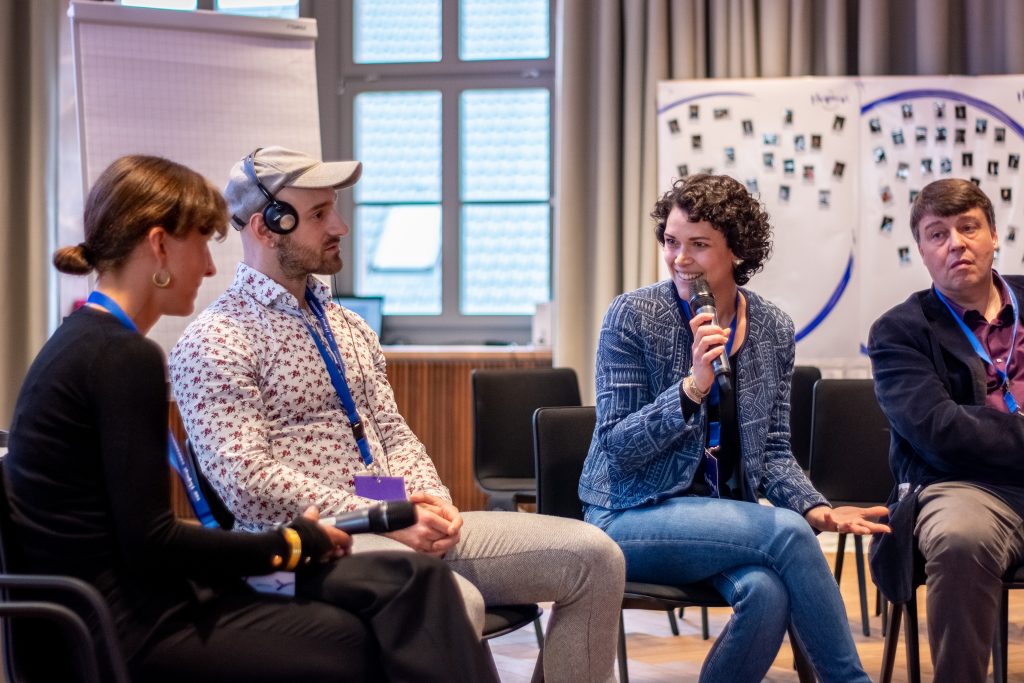 - Sustainability in the Age of Digitalisation 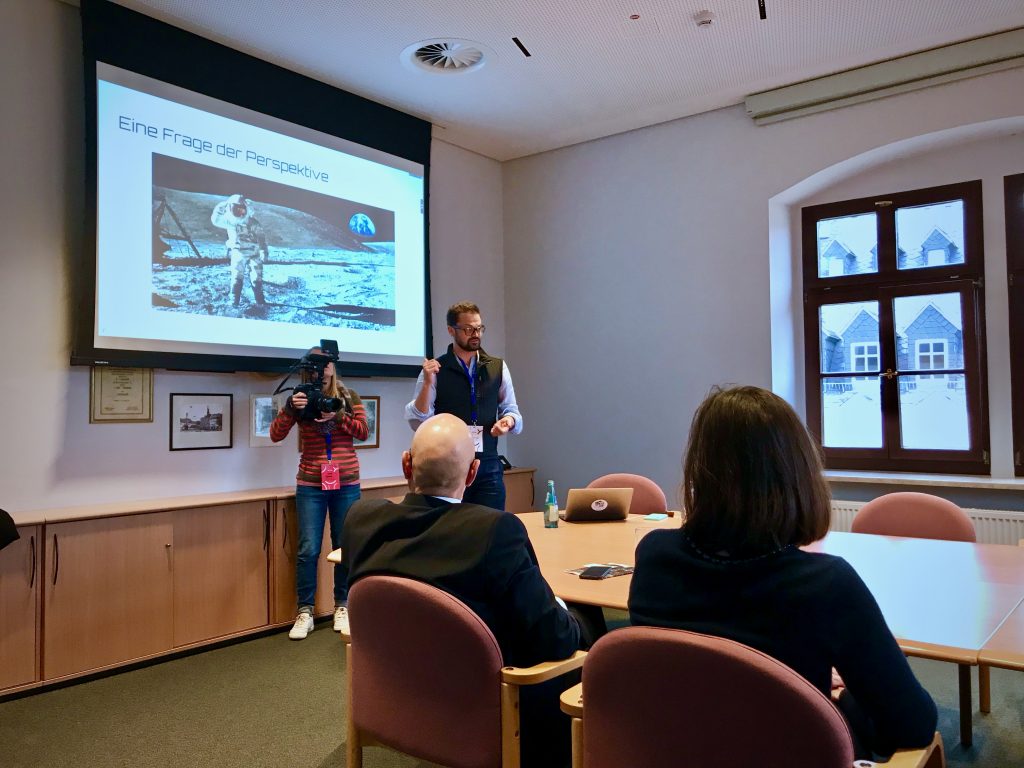 In this workshop, Rudi introduced everyone to THE HUS.ecosystem and visions. He emphasized his theory about how holistic sustainability can only be accomplished with changing the systems today. For that, one has to be radically open and believe in new ways of thinking like the way Rudi thinks without geographical borders. “Climate change doesn’t know the concept of borders. We are all in this together and have to acknowledge this sooner than later.” With his introduction keynote the participants were inspired through hearing about THE HUS.mindsets, the willingness to change and how the domino effect can accelerate even the smallest initiatives to lead big change. When the discussions opened up, the participants philosophized about a fact that we are constantly facing: Being part of all these world changing initiatives, strikes and events, we still see a lot of energy and resources lost after for example such a conference like the one we were all attending. The output of many projects seem to be documented but not always accessible for everyone.

“To create change you need solutions! Humans are not waiting for change, they are waiting for better services and solutions. The digital modern era will bring us these opportunities, we just have to be open for them. The right governance makes it possible. With THE HUS we are building bridges to a great positive culture that will guide a sustainable system change within the digital modern era. The culture creates political change, but politics itself usually don’t create culture. We are a platform to empower humans and organizations to think differently by going the first steps.” – Rudi Hilti

The spirit of innovation

What really made this conference so special was the interplay between the different organizers and their fields: Administration, education / research and economy / finance. It is a great approach to have a holistic conference with sustainable impact for all contributors. Very special indeed was also the location: A 15K inhabitant village between two major Eastern Germany cities. To actually create this kind of diversity and forward-thinking input in a region that is known for right-wing sympathizers and conservative patriotic mindsets takes a lot of energy and willingness. We definitely felt the spirit of innovation, technology and constructive future-paving in Mittweida at THE HUMAN Conference this year. 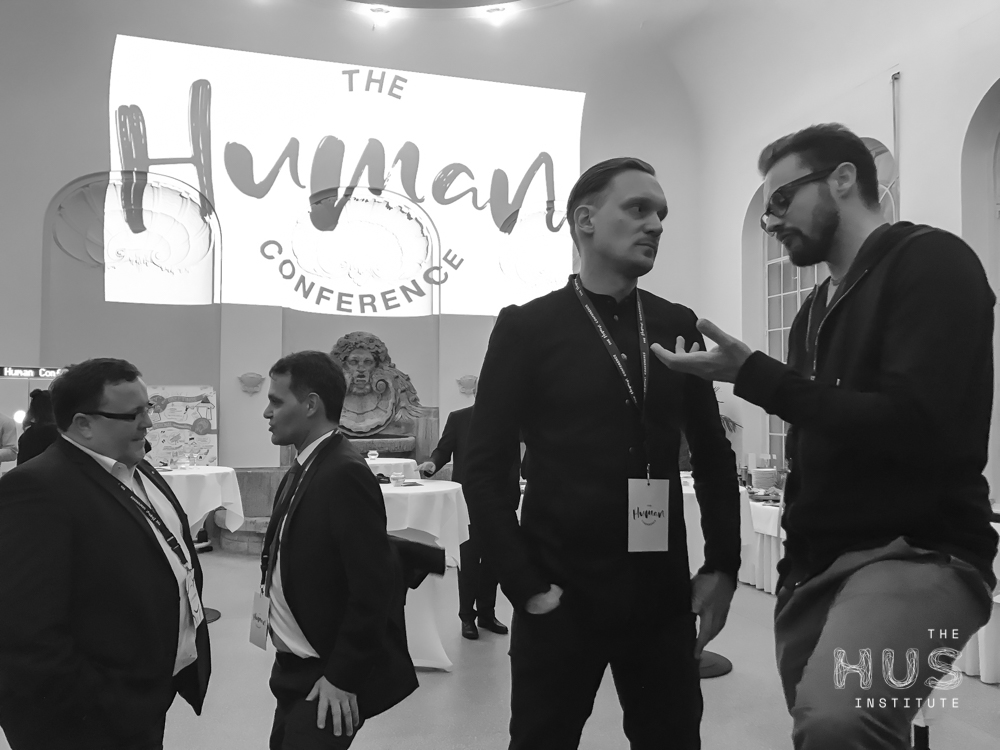 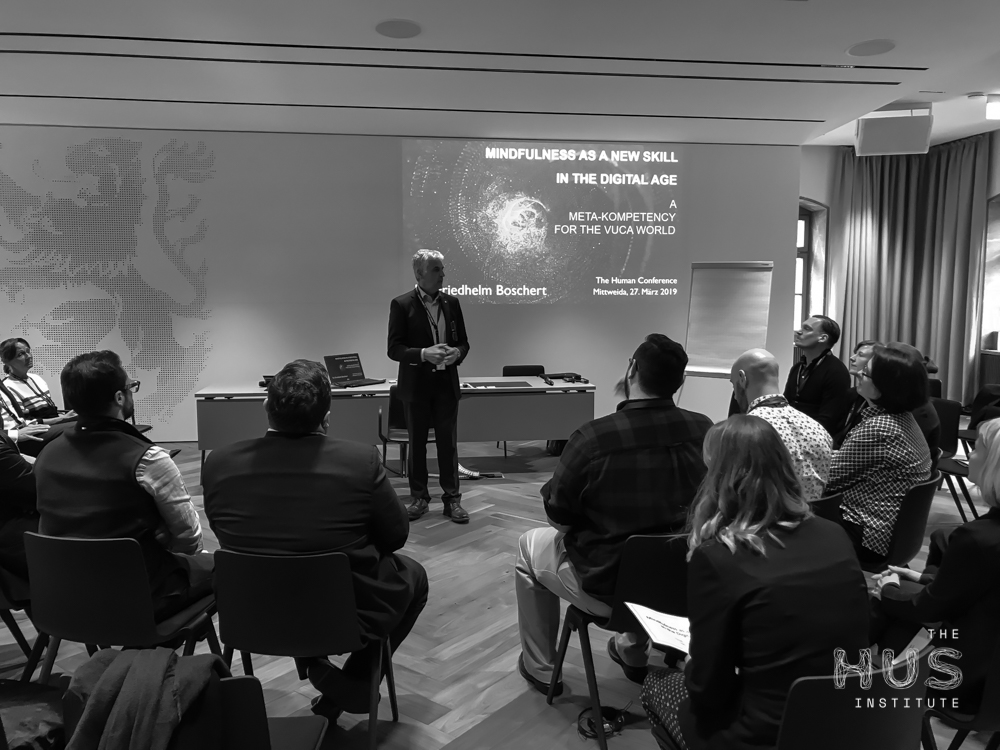 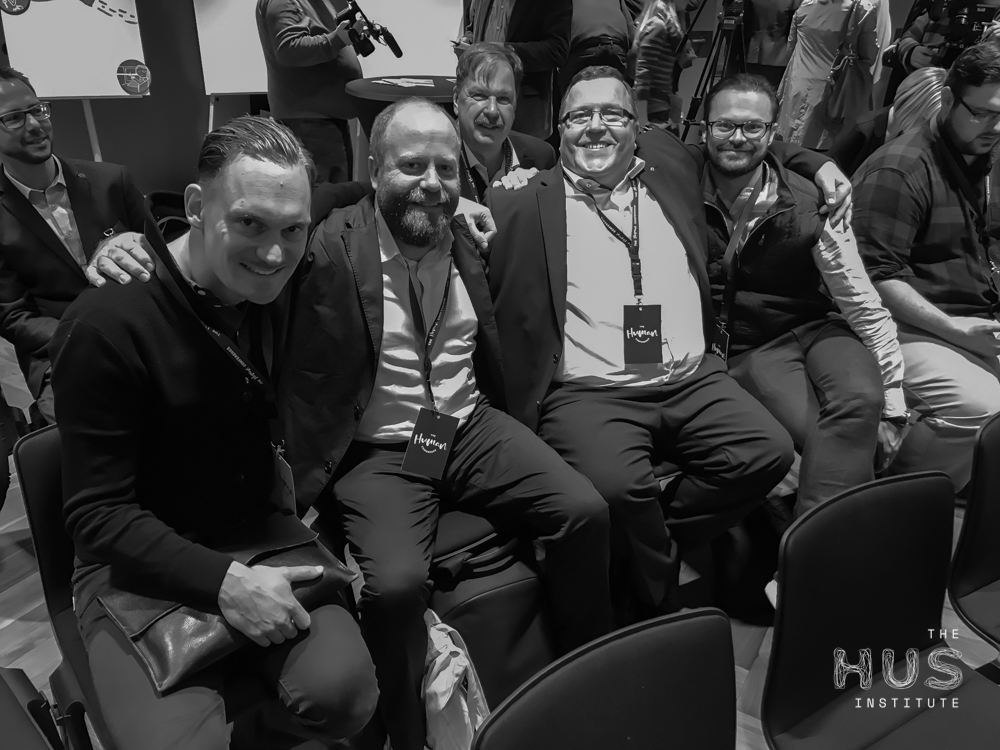 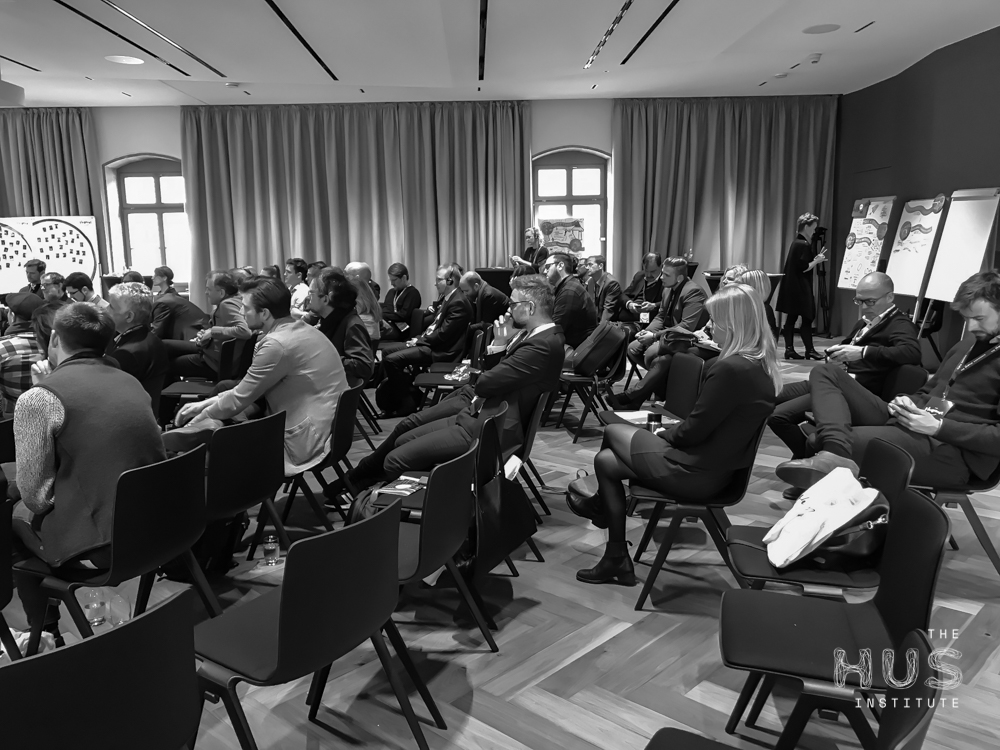 Friends of THE HUS